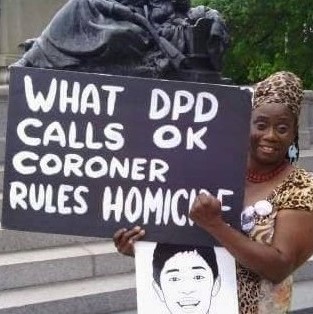 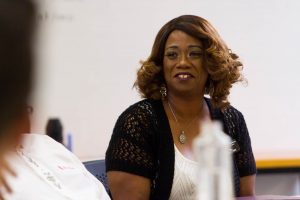 She is the founder of Above Waters Project, whose mission is to support and protect those currently and formerly incarcerated within the US penal system. AWP understands that grave injustice exists within this “justice” system and are thus committed both to ending such injustice as well as helping smooth the transition of our incarcerated brothers & sisters back into society. Whether through data collection and dissemination, policy change, informal advocacy, or otherwise, they fight for justice and dignity for all people.

Q: What does your organization do?

Q: When did your group come together and why?

A: AWP came together in 2014. We discovered there was a population of people who are incarcerated beyond jail or prison, but not yet on parole or probation, living in warehouse styled facilities, as they were dealing with some inhumane treatment which could affect their success as they are trying to make their way through these 30+ privatized institutions, where two of them are state operated. It appeared they had no voice about their situation.

Q: How is the current political climate affecting your work and community?

A: The current administration appears to be volatile to us. We see the threat of locking away as many people as they can into our criminal system. Though there has been a pattern targeting people of color, with Blacks being the highest population incarcerated. Private prisons have made this a cash cow for them, as they profit off those they claim they are here to help, and that includes aiding public safety. The ideology of private prisons in Colorado means that more people will go to jail or prison, and community corrections will be another vein where people who are in this system will ultimately go. This affects our work because Community Corrections lacks transparency to the community and their operations should be made public. If Community Corrections are to continue to receive taxpayer’s money, then they should operate transparently for the public. How Community Corrections operates currently does not give Colorado the real data needed to see how effective they really are.

Q: Can you talk a bit about the programs and research work you’ve established in response to the injustices taking place in the community corrections system?

A: AWP has collected surveys from residents who are currently or previously in halfway houses and we are processing them. However, other research we have looked at is the current Colorado Revised Statue (C.R.S.) and any material coming from boards and commissions including bills that enter our state capitol addressing community corrections and we investigate the past for us to be able to present a more modern presentation to their system. We are working with State Representatives as their “go-to” organization when it is specific to community corrections. We also intersect in other areas of the criminal justice system, as it often includes community corrections operations. Because no one was talking about the injustices of community Corrections until Above Waters Project was founded, there was no push for research or programs. Now we see the need.

Q: What have been your greatest successes?

A: Above Waters Project’s major success is that we have been around now four years! We have made our voices heard to the community and to the residents of community corrections that we are here as a voice for them. We have made our voices heard in 2014 to address the lack of medical insurance (Medicaid) access for those who live inside community corrections because of their inmate status. Yet, prison or jail would not insure them. We worked with the Governor’s office and made contact with Health & Human Services in Colorado and Washington, D.C.. As of the Summer of 2016 those who live inside community corrections now have access to Medicaid and can apply without barriers. AWP also intercepted a proposal created by a task force under the direction of the community corrections board (to be submitted to the CCJJ, Colorado Commission Juvenile Justice) with what appeared to be a restructuring of how people incarcerated in prison would do their time before their eligibility to go onto parole; this suggested proposal appeared to allow for longer prison time with shorter parole. Above Waters Project presented their analysis in 2016 and the proposal was killed. This was yet another win for AWP!

Q: What are a couple of things people can do to support this work?

A: They can help us by talking to friends and neighbors about what’s going on inside Community Corrections.

They can help during legislative session. They can help push for sensible criminal justice reform by speaking to the legislators, making phone calls, and testifying at the capitol.

They can donate to our organization to help us reach our goal that it will take to collect surveys and get transparency data that does not exist. They can donate at www.abovewatersproject.org.