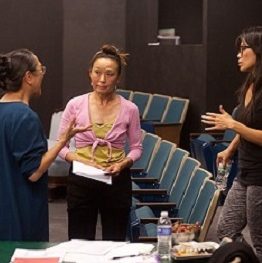 Sit down for a cup of social change with TEA:

Recently we asked TEA: Theatre Esprit Asia a few questions on how being granted Chinook funding two years in a row has affected the health and progress of their organization. Maria Cheng, Executive Director of TEA, had the following to say about the impact of being a grantee.

Chinook is our largest funder and as such it serves as the keystone of our annual budgeting process.  Being awarded a Chinook Fund grant provides the foundational security we need to do our productions which reach out to our constituencies and fulfill our mission.

Two parts of TEA’s three-fold mission is to first, present Asian-Western stories that speak to the human condition, and second, give creative opportunities to Asian-Western theatre artists such as actors and playwrights. In our second year, TEA will be providing full productions of three new plays by three Asian-American female playwrights:

In addition to providing stories and creative opportunities, the 3rd part of TEA’s mission is to create social change; that is,  to bring about better understanding not only among  Asian American groups,  but also between Asian-American and non-Asian-American cultures – white, black, indigenous, and immigrant. After our first year, we felt the need to have a more “grass roots” component to our public productions. As a result, while we will continue to present professional award winning productions in regular theatre venues with normal admission prices [$20-$30], we also offered a more accessible [free or by donation]  venue to reach out to non-traditional  theatre goers. The Chinook Fund grant we just received is not only enabling us to continue producing our award winning professional productions, but it will also help TEA to initiate a new level of performance – one we are calling the Peoples’ Story Theatre, and to that extent we have first reached out to the Romero Theatre Troupe – Social Justice Through Organic Theatre,  to collaborate with us in telling stories on racism, classism and sexism.

While numerous play reading venues exist in Colorado, there is a huge gap between one’s play getting a reading versus it being fully produced with professional quality. Fully producing a play is extremely expensive, especially with a top notch team of designers, fine actors, all led by a seasoned and visionary director.  However, reasonably priced performance venues are difficult to find, which limits the impact of the stories and performances. Moreover, the US theatre world is dominated by male playwrights and majority culture narratives.  In contrast, three of the four plays TEA is producing this year are written by females.  These are authentic stories, told from the inside-out.  They are not appropriated and constrained by the demands of mainstream audiences, but rather free, creative expressions of marginalized voices amplified by the power of desire and a broader audience.

The three plays written by female playwrights will receive full productions in bonafide theatre venues, directed by directors of fine reputation and cast by audition with experienced actors. Before that,  TEA will be conducting workshop and reflective/critical sessions to fine-tune the plays slated for production. People’s Story Theatre will begin in October, when under the auspices of our ACE – Asian American Cabaret Events, we will begin the first of what we hope will be a continuing collaboration with numerous other grass roots cultural theatre groups–Romero Theatre Troupe being just one. We have designated one of our Board members, who is Head of the Center on Human Trafficking at the University of Denver and an experienced theatre director to begin creating a fully produced evening for our People’s Story Theatre.

Without Chinook funding, we would not have been able to initiate this new tier of social justice theatre to further one of the 3 components of our mission: promote community and understanding among Asian-American groups and between them and non-Asian-American communities.

TEA is grateful to Chinook’s attentive leadership and staff, and to the vision, support and monitoring they provide which helps us to stay on course.