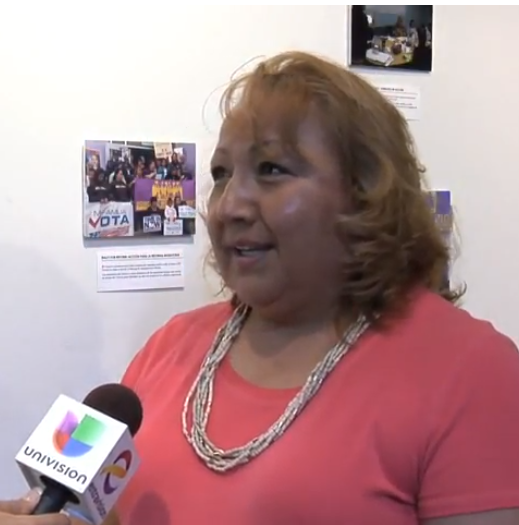 Veteran grantee, El Centro (Centro Humanitario Para Los Trabajadores), shared with us a story of one of our former office workers!

El Centro’s partnership with Chinook has allowed the organization to become a mainstay in the organizing and social justice community.  As one of the few original funders for the organization, Chinook saw the potential and importance of El Centro’s mission as filling a gap in the community.  Today Chinook continues to offer support and allows El Centro to continue to organize a unique sector of vulnerable and underserved immigrant workers.

Araceli came to El Centro amid recent loss of her husband and mother. A hard working immigrant mother of three, she struggled cleaning homes and taking care of elderly clients. The isolation and injuries she sustained at work added to a sense of despair. This past year, however, she found her voice at El Centro among a community of day laborers and domestic workers – many of whom share stories of struggle and illuminate paths of perseverance.  At El Centro, she has participated in skill building workshops and accessed work opportunities through the catering and cleaning collectives.  She also began to learn of labor rights and the transformative effects from stepping into spaces of leadership. Over the past year, Araceli has embraced her new role and has spoken publicly at rallies and to the media. She attended a national convening of domestic workers and lobbied representatives at the nation’s capitol around workplace and immigrant rights. Most recently, she spoke at the opening of a photo exhibit that elevates the profile of domestic workers. She stood there, before an audience that included her daughters, and told her story and underlined a message of strength and courage that can be found through community and leadership.

Like many workers, Araceli faces many challenges as an immigrant worker vulnerable to exploitation and fearful of approaching her employer and risking her livelihood.   Daily she struggles to communicate with her employers in a language that she began to learn later in life, she lacked the confidence and support of a network of others facing similar issues and felt helpless.  As a domestic worker, she is excluded from fundamental labor protections many other workers take for granted, such as minimum wage and overtime and guaranteed breaks.

Centro is committed to social and systemic reforms that advance equality and dignity for its membership. In the case of Domestic Workers, El Centro has revamped it outreached to Domestic Workers from the Denver Metro through job skill trainings in green cleaning and nanny care. Through these trainings, members are invited to engage in a deeper analysis around the systemic barriers that inhibit or stifle efforts to advance labor protections and rights for their community. In these spaces of reflection, work is done among leaders to shape organizing efforts to affect the change they wish to see. A foundation has been laid these past few years for a legislative effort to create a Domestic Worker Bill of Rights in the near future.

El Centro regards Chinook as more than a funding partner, it really is a community.  Reviewing the history of past recipients or grantees, it is an honor to be a part of this circle. Chinook engenders true participation by community members in the grant-decision making, like few others. To be a part of this community implies a responsibility to promote democratic norms within our organizations and an unyielding commitment to build power for social justice.

How does Chinook keep you accountable?

There are standards and values Chinook promotes that serve as a welcome mirror for us at Centro to be evaluated by. Democratic participation, member leadership, diversity, inclusion, and access are among the key norms and values we work to build upon. Aside from traditional reports to be submitted, the site visits by Chinook volunteer grant committees offer insights and analysis that are unique and reflect diverse community experiences.

What would happen without Chinook support?

Centro’s birth was tenuous and without the support of Chinook, it may not have secured the necessary foundation to build out what it is today. At a time when few funders and community members understand the imperative to support some of Denver Metro’s most vulnerable workers, Chinook stepped forward and allowed for growth and leadership among these workers to lend their voice and build a more permanent refuge for future workers.